There are over 35,000 species of spiders worldwide, with approximately 3,000 residing in North America. Many species of spiders are household pests. Wherever there is food available, spiders are likely to be found. Some spiders like moisture and are found in basements, crawl spaces and other damp parts of buildings. Others like dry, warm areas such as sub-floor air vents, upper corners of rooms and attics. They hide in dark areas. All spiders are predators, feeding mainly on insects and other small arthropods. In the United States, only two spider groups are harmful to humans, the black widow spiders and brown recluse spiders. Both of these groups are composed of several species. 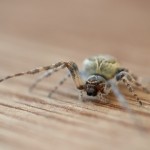 House spiders spin their webs outdoors or in dark corners of moist rooms. They are  generally found along dark recesses of windowsills, shutters, and overhangs. Their webs have a decidedly unkempt appearance with debris and body parts of insect prey they have devoured. Although the webs tend to accumulate debris and may be unsightly to some, this harmless spider is beneficial and captures many pest insects, including house flies, horse flies, mud daubers, cockroaches, and May beetles. 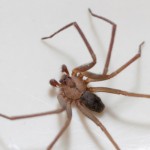 The brown recluse spider constructs a non-descript, irregular web that is used almost exclusively as a retreat. Indoors, they are found in attics, crawl spaces, under/behind beds and furniture, inside shoes and between hanging clothing. Outdoors, they are frequently found under rocks and in barns, sheds and utility buildings. These spiders have a painful bite that may develop into an unsightly, slow healing ulcer. 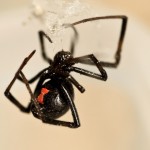 Since the female black widows commonly eat their mate after mating, they often are widows-hence, their name. They are usually found in wood piles, barns and sheds, crawlspaces and under rocks. Widow spiders are not aggressive. Human bites mostly occur as the spider defends her web after it is brushed against or accidentally pinched. Black widows have poison glands and there have been deaths due to black widow bites, but in most cases they are no worse than a wasp sting.

EXPEST EXTERMINATING offers a FREE inspection and evaluation. We use the most efficient spider removal methods.

Also In This Section

Create your online business with the latest design trends