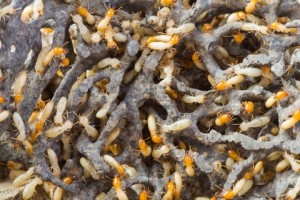 Every year in the United States, termites cause more damage to structures than fire and earthquakes combined. As a general rule, termites are attracted to wood and moisture while being repelled by light and air. As a result, termites can go undetected by most homeowners until damages occur.

There are about 2,000 known species of termites throughout the world. In the U.S., Subterranean termites, including Eastern, Western, Desert, and Formosans, which build underground nests, are a concern in every state except Alaska. Subterranean termites can be extremely destructive. They can tunnel to wooden structures (like your home), into which they burrow to obtain food. Termites all share a virtually insatiable appetite for wood and other cellulose-containing materials. Given enough time, they can cause extensive damage and will feed on the wood until nothing is left but a shell.

Termites are highly social insects that live in colonies where populations can reach more than one million. A colony consists of several structurally differentiated forms living together as castes (including reproductives, soldiers, and workers) with different functions in the colony community life.

HOW TO IDENTIFY TERMITE DAMAGE

Termite damage inside your home may first be noticed by the appearance of a termite mud tube; however, you may need to get termite inspections in order to fully determine the damage it’s caused. Termites tunnel through the soil in search of wood for food. When they travel above ground they build pencil-sized protective mud tubes or tunnels. Infested wood will often be covered by these mud tubes inside and out. Termites stay in contact with the soil by these mud tubes and must return to the ground frequently for moisture. If the termites find a moisture source above ground, such as what a leaking pipe would create or wet wood from a roof leak or cracked caulking, then termites will not need to return to the ground for moisture. In this case, the termites would establish an above ground or aerial colony which may not be affected by soil treatment.

Termites chew through sheetrock and wood, eating the cellulose material as they create galleries and tunnels through the materials. Termites cannot sustain exposure to light or air for long periods of time, so they typically eat wood from the inside. As the termites tunnel through sheetrock, they will eat the paper off the sheetrock leaving a thin layer of paint untouched on the surface of the sheetrock. This paint is brittle and is easily flaked away exposing the termite galleries. These galleries are often lined by their mud tubes to provide protection from light, air, and predators, such as ants. The mud tubes also insulate the galleries, creating a dark, moist environment. Before they get that far, it’s best to have a termite bait system installed, but a liquid treatment would also work. If termites are present in the wood, like in a door or window frame, their behavior is the same. They often eat the wood from the inside leaving a thin, brittle layer of wood or paint that is easily broken with fingers or a screwdriver to expose their galleries in the wood. Sometimes live termites are seen moving through the galleries as the paint is flaked or brushed away. These termites are usually white to a beige tint. Some say they look like maggots or white ants. These termites are the workers in the colony that eat wood or paper. The soldiers, which protect the colony from invasion by predators may also be seen. They are easily identifiable by their large, dark heads and large pincer mandibles.

Termite control is an important aspect of homeownership. By the way, it’s also one of our specialties at Expest Exterminating. Call (770) 938-3400 and Leave the Pests to us. 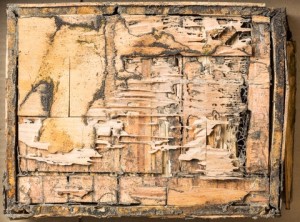